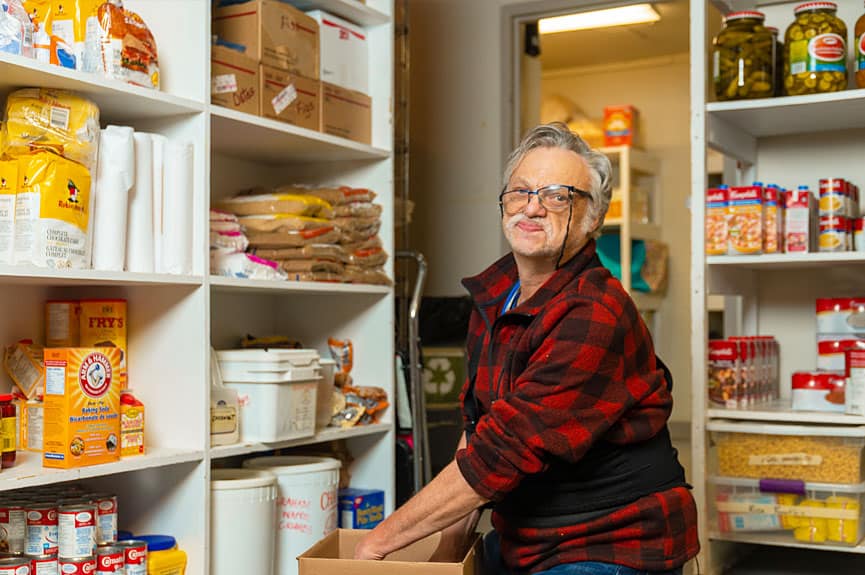 Allan began receiving support from Elmwood’s Supportive Independent Living Program (SILP) in July 2007. He had confided at the time that he felt that there was a significant void in his life as Allan lacked having a purpose and a feeling of self-sufficiency due to not having the opportunity to work in many years and found himself with a limited sense of belonging and community purpose. His family stated that they were at a loss of how to help him build meaning and purpose into his life. Allan had become reclusive and his physical health had declined, he struggled to pay his bills and had to rely on the
Saskatoon Food Bank to supplement his food supply every 2 weeks.

Shortly after Allan began receiving SILP supports he initiated re-entering the workforce as a volunteer with the Saskatoon Food Bank where he volunteered several days per week and viewed this as a small way of repaying the kindness and support that he had received from them. The other volunteers that Allan worked along with enjoyed his great sense of and strong work ethic.

Elmwood Residences required a person to assist the Director of Support Services at Kinsmen Manor. A permanent part-time position was developed with Allan’s skills and talents in mind. It was identified that Allan could learn and excel in this role as the position was developed and implemented with the appropriate supports in place. Once developed, this position was offered to him, which he graciously accepted. Allan started in this position in January 2011 and continues to be successful in it. As a result, Allan has achieved and maintained financial stability. More importantly, Allan has formed meaningful rapport and friendships with many of the staff and residents of Elmwood.

With SILP support, Allan has been able to maintain a comfortable home and has also acquired and enhanced many skills including shopping and budgeting which has allowed him the opportunity to make some major purchases and enjoy trips to Victoria, B.C., Las Vegas and most recently, Minot, North Dakota. As Allan enjoys giving back, he volunteers to support others with Elmwood’s Recreation Department on a weekly basis.

Allan is truly a testament to what it means to be part of the Elmwood family as he is not only supported by but is an important staff member. When staff first met Allan, he had very limited community inclusion and supports, aside from those offered by his family. Allan had the determination and support to make significant, healthy and meaningful enhancements to his life. There is no looking back now for Allan as he continues to excel in all areas of his life!